This is a story of a future America. Moving between the government bureaucracy of Washington and a farming town called Vexton, MANUFRACTURED tells the story of a politically divided country in search of the true meaning of life, twenty-five years after a civil war. When a mysterious illness infects the country’s youth, nationwide panic erupts, adding pressure to an already unstable government as it fights to find the cause and cure. Amidst environmental turmoil, a series of high profile murders suggests a conspiracy that could put America’s entire future in jeopardy. 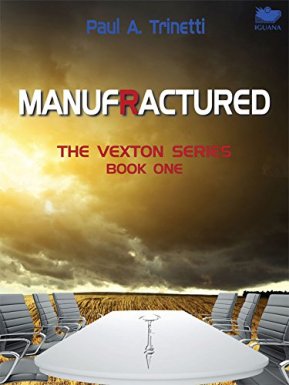 This book was a wild ride. My head was spinning trying to piece all the elements together. So much happens!

I love all the different view points you get in this book! You get a piece of literally every side of the story. You really feel all the ups and down with the characters. I swear this book is so well written that the whole time you are sucked into the eyes and ears of the current person’s point of view. It was everything I had to put this book down and get some sleep. I probably could have read it straight through.

Division in politics in inevitable. There are always going to be varying opinions on every move a governing system makes. What makes this story so intriguing is the brought to life scenarios that extreme division can cause. The lengths that some will take.

When the illness first comes to light I was riveted. It spread so fast and was hitting the most vulnerable of a countries citizens – the children.  I was enraged thinking that a governments negligence of a environmental problem was at cause for all this suffering. Then..boom…PLOT TWIST!

Get used to those. It’s one after another in this book. Just when you think you know why something happened and who is at fault the entire thing is flipped and you’re left reeling.

I give the book the full 5.