He was always there for me, Jenny Kovacek says in the opening of the novel After Dad, and indeed, her father is such a charismatic force in the family that despite his untimely passing, he continues to have a dynamic impact on his survivors. Set mostly in Southern California during the tumultuous 1960s, Ralph Cohen’s debut novel tells the stories of the man’s three children and widow as they cope with his loss. Though missing, the father is never far from their minds, and during critical moments in their lives, he seems to reach out in various ways, from simple memories of touch and voice to artifacts left behind to a sense of his ongoing existence. How each of the family members responds to his lingering presence leads to results that are by turn comic, tragic and transformative. 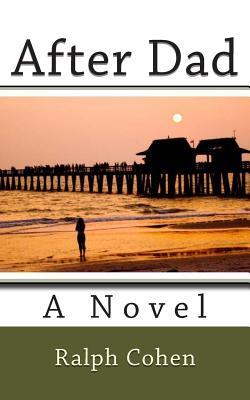 After Dad was a haunting read. The author does such an amazing job drawing you into the eyes and thoughts of each character.

Jenny seemed for the longest time to not believe her dad was really gone. You can feel her heart aching at his loss. Her dad truly was her best friend. She’s basically just floating in her existence. Her view of the world is very surreal. She is a very relatable character for me.

Margot on the other hand felt his loss in a sharp way. Like a piece of her was just gone and all the cogs that needed to push each other for her to function lost all their teeth. Like a chasm opened up inside her and she couldn’t figure out how to keep from getting sucked all the way in. I felt for her. Life really does suck out parts of you along the way. I just wanted to grab her and give her the right direction to go in.

Toby…poor Toby I think felt it worst of all. Maybe even more so than his mother. He lives in a delusion. It’s almost as if he moves in and out of reality. His character was fascinating to read from. His view on everything is so distorted. Even at the end….it’s as if he wasn’t really all the way into reality.

I wish we would of been able to read more from Ruth’s perspective. Being left with three kids couldn’t have been more of a shock. Being married to someone with so much personality and then losing them….with everyone still looking at you to keep it together….I just can’t fathom the pain.

This man was such a vibrant person. With his stories and his flippant way of handling the world. Almost as if nothing could touch him. I can imagine how big a hole losing someone like that would leave.

It would feel empty. Empty and cold.

He has done one of the hardest things an author can do. He’s made me love and hate, fear for and cheer, fall in love and then lose it all. He has made me feel. No greater deed can be done than to appeal to what make’s us human.

This book deserves the full 5 stars.

3 thoughts on “Book Review for “After Dad” by Ralph Cohen”