The Alpha Centauri star system begins to collapse and the resulting gravitational waves reach our planet, creating strange phenomena around the globe, leaving the people who are affected by them wondering what in the world is going on. A scientist in an isolated observatory sees clues that tell him what is happening to the world may be bigger and more deadly than a few earthquakes and a few floating objects. Dr. Paulo Restrepo will have to race against time and the doubts of a world used to gravity behaving the same everywhere at every time. By the time he figures out the cause and what that means for the final approaching event, it might be too late, but he has to try. 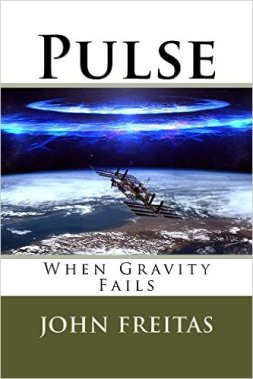 Although labeled as Sci-Fi, Pulse is also an Action novel. From beginning to end the book is a steady back and forth from one action scene to the next. It’s very fast paced.

Think “San Andreas Fault” type of film. If this book were a film that is. Honestly, I could see it translating pretty easily into a film.

Since this is a small novella, there are a few things that you lose out on. Mainly, character depth. I will go on to say that even with little information, I still feel like I got a decent sense of who the characters were.

I really enjoyed the different perspectives throughout the book. It helps a smaller novel feel bigger than it is. The perspective I enjoyed the most was of Holden (child). His outlook on his parents divorce as well as the events that unfold was almost poetic. Out of all the characters in this book, I have to say Holden is my favorite. He comes across to me as an old soul.

I don’t know enough about the science in this book to know if its probable or not. As a person who is ignorant of the subject, I felt it had the authenticity it needed to feel real.

The only real complaint I have about Pulse is that the ending felt a bit anit-climatic. There was this real sense of urgency with the characters and this intense build-up. Then…within a few sentences it was over. I was a bit annoyed to say the least.

I would also like to add that the book I was sent was a pre-edit copy. I am rating this a 4 on the promise from the author that he has since had it edited.