Mark Sills, 16, found the car on Craigslist –the ad read RUNS GOOD -NO REVERSE. He buys the car and, along with his pal Fred, decides to fix it up, but he doesn’t have much experience. Oh, Mark once oiled the chain on his bike and Fred added a quart of oil to his Dad’s car, but that was about it. A car with no reverse soon finds Mark in trouble with his girlfriend, her mom and his school’s Vice Principal. He finds some new friends too — an ex-Marine junkyard owner and an old lady named Agnes. The title describes the car, and also the boys –and a girl named Karen.

From our review – “Mark is a sweet if sometimes clueless young man. “Runs Good No Reverse” is the story of a boy, his friends and a car but also contains some great life lessons. I loved the simple way Hershman writes and his down home characters. These are regular kids with regular problems and what a breath of fresh air they are.” 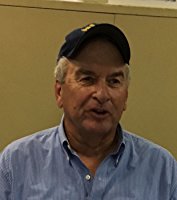 Mike Hershman was born in 1944 and is a lifetime resident of Southern California. As a boy he loved surfing his balsa wood longboard with his pals. He is also a fisherman and has enjoyed catching everything from a small Perch at the Manhattan Beach Pier in 1954 to a large Marlin off Cabo San Lucas in 1981. He now has fun fly-fishing on his float tube on Lake Crowley. Mike retired in 2006 and decided to try writing books for boys. Over the next five years he wrote 11 books. He then became a Tour Guide on the Battleship IOWA. The famous World War II ship, which could fire shells weighing as much a VW bug 24 miles, is located near Mike’s home in Rancho Palos Verdes. In 2017, Mike decided to dust off his manuscripts and publish them on Amazon. The first five are his George Bailey Series and Runs Good No Reverse. He plans on adding the others over the next few months. They include Dear Sgt. Sherlock – a mystery set in World War ll. The story is told through letters written by a Marine in the South Pacific, his younger brother at home in California, and their friend – a Japanese boy at the Internment Camp at Manzanar. Another book is the story of a California boy living with his aunt and uncle in England during the Blitz. He and his cousin keep track of German bombers from their bedroom –also known as Trucksbury Bomber Command.