The explosion jolts him awake. He sits up, gasping for air, heart thumping.

Was the blast real? Perhaps it had only happened in his head, a bad dream. Demons of the dark, his father had called them. ‘Push them away. They’ll only poison your thoughts. Seek the light and they can’t hurt you.’

Naveed is sick of war – of the foreign powers and the Taliban, the warlords and the drug barons that together have torn Afghanistan apart. He’s had to grow up quickly to take care of his widowed mother and little sister, making what little money he can doing odd jobs and selling at the markets. When he adopts Nasera, a street dog with extraordinary abilities, he has a chance to help rebuild his country. But will a new friend’s betrayal crush his dreams of peace forever?

From the winter of war comes the spring of hope. 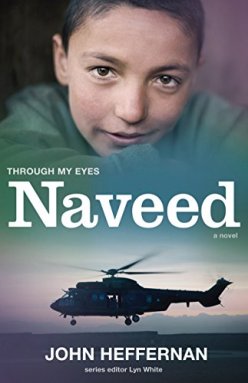 I found this book while browsing the kids chapter books at my local library. It was one of those books the librarians shelve cover out so it caught my eye rather quickly. I picked it up and after reading the summary decided it sounded like a book I should read and maybe later add to my kids homeschool reading list when they are the appropriate age. I often grab a chapter book along with the younger kids books and if they sound like something that would interest my four year old now, I read them to him. My four year old is much too young for this book but it’s absolutely a book I’ve added to our reading list for later years.

“Naveed” offers two unique perspectives that, as an American, I don’t often get to see. An Australian solider and a young Afghan boy. Naveed may be a child but his struggles are anything but small. Naveed’s mother relies on him to provide for the family and Naveed works hard to do so. He also provides for his younger sister who, due to a bomb, has lost her legs. Naveed carries a heavy load of responsibilities but it’s clear that he carries them with love. Naveed’s love for his family is beautiful. He has known nothing but war and it’s touched every single piece of his young life.

After a bomb took away his father and severely injured his sister, Naveed’s family lives in a hovel and their situation is precarious. The land lord is a bad man who has even worse friends and cares for no one but himself. He sets his eyes on Naveed’s mother and I held my breath with worry about Naveed’s family and how or if they would find a way out of that nasty man’s reach.

Naveed is adopted by Nasera (the dog) and his life takes on a whirlwind of change. By chance he meets Jake and opportunities open that he never thought possible. Naveed’s world is almost broken by a relative (whose really broken himself) and for a time, everything is thrown into chaos once again.

I want to talk about that chaos for just a minute. In the west, we are so quick to see a terrorist and dehumanize them. We don’t think of all the things that built up and turned this otherwise unassuming person into an extremist. Heffernan brings humanity back in this tale and gives us a look into what goes into the makings of a terrorist. It’s not harped upon but Heffernan gives us a window into a world I don’t think we discuss or even acknowledge nearly enough.

Kudo’s to John Heffernan for doing his part to put a very human face on a very ugly war. May his stories enrich our lives and encourage us to find peace with one another.