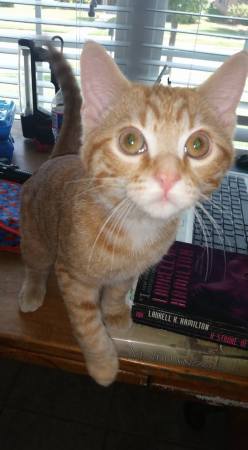 We got Sammy a few months ago from a neighbor whose cat had kittens. He looks very much like a cat we had when my son was first born so we were ecstatic to give him a home. Our other cat ran away after we moved and it was devastating to all of us. Since he is chipped there’s a good chance he may one day find his way home but it’s been over a year and we haven’t found him. My son has been begging me for another cat so the hubs and I finally relented. We were really holding out for our lost fella to come home. We really loved him. Happy for us that we took in Sammy because he’s very much like our other cat and we adore him. He’s a bit frisky and likes to chase anyone and anything. Our elderly black lab Buddy’s tail is a little worse for wear but Sammy has helped my overweight Chihuahua lose some flab so it evens out.

Our other cat tower was in bad shape so when I saw that Aldi’s had some on sale I sent the hubs to grab one post haste.

It’s quite a bit smaller than our other one but as Sammy isn’t fully grown yet it does the job. Mason’s birthday is fast approaching and I just don’t have the extra funds to upgrade just yet but when I do you best believe it’s going to be a monstrously giant and fun towerplex for Mr. Catson. Our pets are family and we do out best to treat them as such.

Is that too much? Nahhhh

In other news, Mason finally found some kids to play with for once. He’s been pretty down about not having anyone to play with and it hurts this mommies heart everytime he tells me he wants a friend. I’ve scheduled playdates as often as I can but in the mess of life people often bail on us and poor Mason gets so upset . The hubs and I try to remedy this by taking the kids to the libraries play area as well as to our local Aquarium. We have a membership so it doesn’t break the bank to go. Sadly, it’s not often that a kid takes Mason up on his offer to play . Mason is high energy and quickly overwhelms other kids. He doesn’t mean to but he really can’t help it. He’s just a rambunctious guy.

Thankfully, this weekend was different. We took Mason to one of our local parks and he found some kids close to his age (almost 4) to run around with. I was thankful he found some buddies but was quickly reminded why we don’t often go to the public parks. The kids he was playing with weren’t there for 30 minutes when their mom rounded them up to leave . Mason was crushed and I  tried to cheer him up by offering to help him go down the big kid slide. When we got up to the top of this tower thing where the entrance to the slide is Mason and I saw that it was blocked off by a pallet that was zip tied to the structural poles of the tower (real classy). I looked over the pallet and saw that toward the bottom of the slide the plastic was melted and misshapen. I  gently convinced him to go down another and went to examine the damage of the other slide. It looked very much like someone had taken a blow torch and melted it (I’m not scared you’re scared). The park we go to is a newer one but isn’t being taken care of and is quickly falling into disrepair. This is why we usually go to the park in our neighborhood since it’s taken care of by our HOA. Oklahoma is quick to take our middle class taxes (not rich people of course) but that money isn’t going into the community. Someone should have a protest.

Sunday I took Mason to the library to play and get new books. He found a friend for a bit but the kid was way more laid back than Mason so while they had fun I could see Mason getting antsy. He has a hard time sitting still for long and this kid was happy to sit and just play with the lego’s.

After we left Mason told me he liked the kid but reeeaaallllyyyy needed to run so I raced him to our car. I let him beat me and his big grin was worth my bright red face and lack of oxygen. The stuff we do for our kids.

Trying to keep up with my kids is keeping me young. Someone get me a hot chocolate and tell me when it’s Christmas.