Keely Andersen hasn’t visited her hometown more than a handful of times in the last ten years, but when her doctoral research sends her back to Marietta for the immediate future, she can’t wait to reconnect with the community and the mountains she missed so much. Of course, nothing goes as planned, and Keely’s truck breaks down a few miles outside of town. When help arrives, she finds herself face to face with her brother’s best friend – the guy she used to call big, bad and gorgeous – Jonah Clark.

Still settling back into Marietta after a harrowing stint as an army helicopter pilot, Jonah Clark plans to spend a few days hiking the local mountains to prepare for his job as a pilot for Crawford County’s Search and Rescue team. When he stops to help a stranded driver, Jonah is shocked to find his best friend’s younger sister is the one behind the wheel. Only now, instead of the geeky teen he remembered, Keely is all grown up with curves he can’t resist.

Though the sparks of attraction ignite immediately, they’re hesitant to act because of their shared past. But when a project dear to their hearts is threatened, and a boy is lost on Copper Mountain, Keely and Jonah drop everything to fight for what matters, including each other. 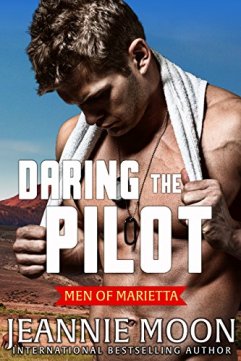 “Daring The Pilot” was a sweet read that kept my attention (mostly) until the last page. While it was a bit cliche at times and easy to guess the plot at others the characters warmed my heart and their bumbling made me smile.

I loved Keely’s character and found her endearing and charming while also a good example for women in science. She was whip smart but not cocky. I loved how connected she was with her community and her parents while also forging her independence. I did find that her childhood illness used as a motivator for parental control was a bit odd since Keely had been traveling the world for many years before she made her way back home. You would think that her parents would see her dating a man she’s known her whole life as a safer route than world travel. It didn’t make a lot of sense that they would disapprove of that after so many years of Keely proving she can handle herself. This weird part of the story was off-putting and I found myself pulled out of the story.

Jonah is a mans man for sure. He’s done his fair share of traveling but unlike Keely his venue was a lot more dangerous. I liked him but didn’t love him. I feel like his character needs a lot more work to bring the reader more to his side. After finishing the book I felt like I should of known him better than I did.

A big part of what I don’t like about the story is Keely’s virginity against Jonah’s experience. I don’t like that Keely is presented on one side as this very worldly woman and on the other side is presented as this naive woman sexually. This was another part of the story that felt very unauthentic and I was once again jolted from the story.

I think Moon should take a step back and take a good long look at how she is presenting women. 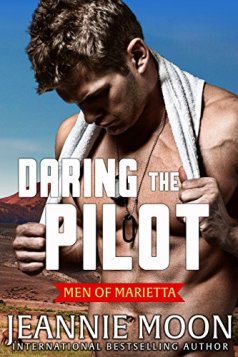 This story is about two adults falling in love. Keely is 28 years old, preparing for her doctorate. Jonah the age of her older brother, a Captain, out of the military after numerous years, the last of which left 6of the men in his unit dead. Jonah had found Keely 10 years before in a storm that had nearly cost her her life. They are definitely not strangers to each other & definitely not children!.

A great storyline, interesting side stories, of not only the people, but the history of the Town of Marietta as well. Small town discussion (gossip) of people’s lives is prevalent. And Moms act about their adult kid’s lives the same as if they were indeed much younger. Fun stuff to read!

You will enjoy this one dear reader. Read & enjoy. – Amazon Reviewer